You better check your attitude! I think it’s pretty easy for us to have “attitudes” that we don’t want to have right now. Spending time without being able to worship in person. We can’t go to our favorite restaurants. When you go to the store and you want to buy something, the shelves are empty.

The media continues to make video after video telling us what to do or not do. It is easy right now to have an attitude.

It’s this feeling of poison inside. It’s this attitude that is rotten to the core it makes you feel sick, makes you disagree with others, and just makes you generally unhappy. That’s a mental state and a physical condition.

In reality, those conditions are simply outgrowths of the spiritual condition that exists without Jesus Christ. So today we want to take some time to learn about the new attitude that Christ Jesus gives that leads us to positively serve.

If you are feeling the negative thoughts, the constant battle going on inside of you right now. Then you aren’t so different from the Apostle Paul. Today we read from Romans chapter 8 but in Romans chapter 7 Paul has some pretty shocking words. “What a wretched man I am! Who will rescue me from this body of death?”

He talks about the struggle. “I have the desire to do what is good, but I cannot carry it out. The good I want to do this I don’t do and the evil I do not want to do – this I keep on doing!”

Those are some pretty negative words. Those are words that describe spiritual condition.

“Those who live according to the flesh have their minds set on fleshy desires” “The mind governed by the sinful flesh is hostile to God; it does not submit to God’s law nor can it do so.” 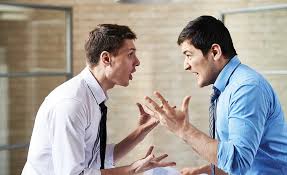 So when things break down in the world human beings naturally panic because they only care about flesh desires. When stress comes into the existence of a human being they naturally will fight against the one who seeks to relieve it God. When God places a rule over the head of a human being, the natural response is to be rebellious.

Maybe some of you have heard this phrase before, “if I told you the sky was blue you would disagree with me and say its green.” That’s a phrase that parents use to talk about teenagers. No matter what words a parent says…there will be hostility and discord. If you’ve felt that…welcome to God’s dealings with us.

But Jesus Christ ushers in something new. For people who were like that. “Therefore there is no condemnation for those who are in Christ.” “For what the Law was powerless to do God did by sending his own Son in the likeness of sinful flesh to be a sin offering.”

So God took our impossible, dead, poison attitude and changed it. God became the death so that death would be expunged. It wasn’t something that human beings could do. It wasn’t even like God did part of the change and human beings did another part. V. 5 shows a totally desperate situation hostile to God, does not submit, can’t submit, cannot please and God said I’ll die for that and washed it all away.

Now perhaps as I read this lesson you hear those words that describe the human nature, can’t…won’t…doesn’t…and its shocking and hurts. Maybe its unbelievable to even think about what we were.

Or maybe right now it’s not so unbelievable. Two weeks ago I stood in church and I said, “the true color of faith will show in a time of crisis…take away health, comfortability, and money and people will start to act exactly what their sinful nature is.

Yesterday I watched a man drive his car right up onto the side walk at the grocery store taking out a bunch of bushes. People knocked on the window to ask him if he was ok. And he screamed at them for being nice.

Now that’s extreme. But is your sinful nature’s attitude getting the best of you right now? Paul says, “who will rescue me from this body of death?” Your pastor felt that way this week. After a bunch of conversations, fighting with a computer, having his usual weekly routine upended…I was the hostile, does not, can’t, wont kind of guy.

Is that where you’re at? On edge, can’t deal, won’t deal, hostile to others? Maybe right now you’re at best starting to worry and at worst starting to get angry at God saying what in the world am I going to do now?

This is a time to slow down – confess when our sinful nature is ever present – and turn to see this beautiful verse.

“There is NO CONDEMNATION for those who are in Christ Jesus”. You are not slaves to the attitudes of your minds and our sinful hearts. You have been freed of those sins. Who will rescue you from this body of death? Who will rescue you from this sinful negativity and hostility that sin causes to arise at a time like this? Praise God because Jesus Christ gives you the victory. He has set you free from sin and death. He nailed your poor attitudes and your sinful hearts onto the cross so that now God’s requirement that you be perfect is something that God says you did every time because Jesus did.

And that new mindset in Christ gives you a new attitude to serve.

Romans 8 says that those who live according to the flesh have their minds set on what the flesh desires.

But you are not in that realm anymore. You are this, “if Christ is in you, then even though your body is still subject to death, the Spirit gives life because of righteousness.”

Now friends when you stare down a list of people you need to lay off – you aren’t going to panic but you will provide as best you can and then refer them to the Word of God that says he promises to provide.

Now when you look at a virus that is upending your life you don’t worry about food and money for yourself instead you look first to share.

Now every desire of your flesh turns to be like Christ who did not come to be served but to serve and give his life for you.

I keep hearing these words…we are at war with an invisible enemy. And I suspect they’re talking about this virus. While that is true. There’s another invisible enemy too – the devil battle is not against flesh and blood but against the rulers powers and authorities of this dark world – the spiritual battle.

Praise God that Jesus has won that battle and made you new.

So that now you can banish that poor attitude. You put aside the worries and cares of your flesh and instead rest in the forgiveness of Christ yes. But also take the task that he gives you gladly to be the light and life that he gave you to the world. AMEN