It All Goes Down Hill From Here!

It all goes downhill from here. That’s usually what I say when someone discovers my one really long grey hair in the front of my head. It’s all downhill from here. When people turn fifty we get those balloons that literally say, “over the hill”. We say jokes like that because they help us to deal with the aging process. There’s 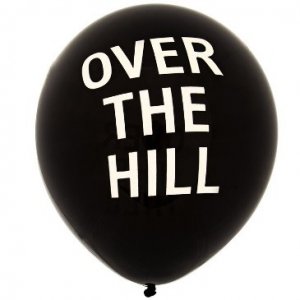 an acknowledgement in the joke that says, “Down there likely isn’t as pretty as what was up on the mountain.” But don’t be afraid! You can always look back up there and remember!

6 days before Matthew 17 Jesus is telling his disciples that his ministry on earth is coming to a close. He’s very soon going to die on the cross. He’s beginning to prepare them for the downhill part of his ministry where they would see him suffer. The days of crowds showering them with love would now change to crowds jeering and shouting crucify – so be ready because things are about to get, at least from a worldly perspective, a whole lot worse.

Think of today, Transfiguration, as a preparation day. It’s the day when people say it’s all going downhill from here. Jesus takes Peter, James, and John up to a high mountain all alone. And suddenly Jesus’s clothes start to glow like lightning. His face began to shine like the sun. Somehow right before there very eyes Jesus changes. He begins to show them what was always there but forcibly hidden – the fact that he was God almighty. For a brief moment Jesus envelopes all of them in his glory.

But the three disciples are not the only ones there to witness this. Coming down from heaven – Moses and Elijah stand with Jesus. And from the other accounts of the story we know what they were doing. They were discussing Jesus’s departure from the world. They were offering him encouragement before he went over the hill to Jerusalem to die. And then God the Father shows up with the ultimate encouragement. Jesus I know that you are going down this mountain. I know it is hard. But you are my Son whom I love. I am well pleased – your sacrifice will pay for the sins of the world. 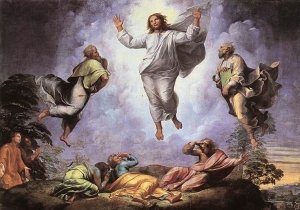 Recap. Peter James and John see God himself, which by the way Jews know this verse, “no one can see God and live”. They hear the voice of God the Father directing them personally, “listen to Jesus.” They see two dead guys Moses and Elijah! And all the while Jesus is talking about his death and their suffering for following him. Matthew says, “they fell on their faces and were terrified.”

Peter is so scared that he offers to build Moses and Elijah and Jesus some tents up there so they don’t have to come down the mountain. He doesn’t want to come down the mountain because he’s doesn’t want the suffering for the faith that is coming. “But Jesus came and touched them saying, Rise and have no fear.” Let’s walk down this mountain together.

Usually when I make those jokes like it is all downhill from here I don’t really mean it. It is a joke. What the disciples were feeling was no joke. Going down the mountain meant some bad things for them. Following Jesus led them to suffering.

I suspect that feeling is no joke for you either.

It’s no joke when you want to follow Jesus but you look at the world around you and you think wow everything is falling apart. My family doesn’t all go to church anymore together – people don’t believe – it’s all over there’s no point in inviting people to church when they don’t listen.

It’s no joke when you look in your heart and you see fears, doubts, and sins that you don’t want to speak about but God knows and you think I have spiraled out of control…there’s nothing good for me. I wanted to serve Jesus but I went way downhill where I didn’t want to be.

For different reasons you feel the same fear of the disciples. You stand before a God who shines like the sun and you say I don’t shine like you. You hear the voice of God that says, “listen to him.” And you know you don’t always. Your guilt makes you think you should be punished.

And Jesus puts his hand on your back and says I’m walking down this mountain into the hell that you deserved so that you don’t have to. RISE and have no fear!. The transfiguration – the site of God’s glory on this mountain today is the sight that you will enjoy in heaven. It’s crazy! God says you get to ascend the mountain to heaven because of the son whom I love though you deserved for everything to go downhill. Friends very soon we celebrate lent – and you are going to hear familiar words dust you are and to dust you shall return. That’s reality of sin. But you don’t have to fear that death or that dust. You have God almighty shining that darkness out of your life for today and for eternity. Jesus Christ left glory on the mountain so that you could return to it. Don’t be afraid of your brokenness or the broken world – he beat it.

Many of you know that one of my favorite things about being a Pastor at Spirit of Life is the nursing homes that I get to visit each week. As I spend time with people there I always thought it was really weird that they want to see pictures of places I had been. But now I really get it. One of the ladies said, Pastor I’m at the end of the line here before I go to heaven. Sometimes it’s just nice to look back through you and see cool memories.

Jesus and the three disciples come down this mountain. And they find themselves walking into a mess of persecution, betrayal, and pain. Some of them even get killed for what they believed. I have to imagine that Peter, James, and John looked back on Transfiguration Mountain and remembered that day for some time. The remembrance of that view where God was God and showed it made the end of the line here all the more exciting knowing that the memory of his glory would soon be their reality.

Friends you might indeed feel like your life is rolling to places where you don’t want. You may lament the spiritual shape of the world that we live in. You might even say to yourself Jesus could you just come back already!

When you feel that remember this view. Remember that God is God and his powerful plan has never changed to save you. Stare into the power and glory of the God who said I put that aside for you. Because the glory you see today? The resurrection power they experienced – the voice of God! That’s something you can look back to in the Word and say someday I’ll have that.

Until then let’s keep walking down this mountain – to places where yes we suffer following our Savior. Don’t fear these things instead focus on what you’ve clearly seen. God and his love before your eyes. AMEN 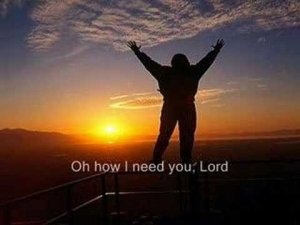